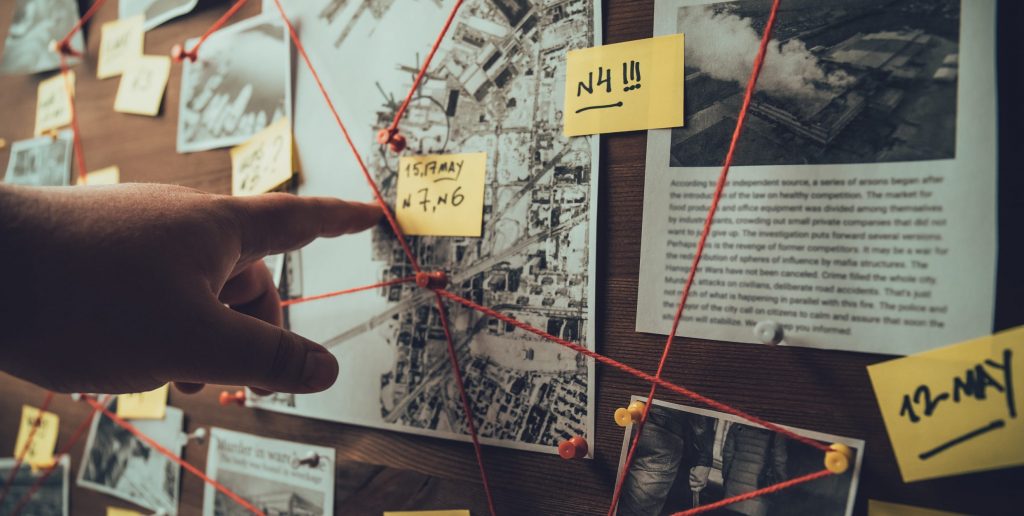 In the fifth season of Breaking Bad, DEA agent Hank Schrader observes a cork board with photos of members of the organization that controls the sale of drugs in Albuquerque. Red strings connect criminals with a known relationship, while the blue threads are the possible links still unconfirmed. Hank suspects that this graph is missing vertices and edges, especially now that blue methamphetamine has returned to the streets.

Days later, during a family barbecue, he will accidentally find the initials “WW” in a book and infer that Heisenberg, the central node of the criminal network, is none other than his brother-in-law Walter.

In the real world, artificial intelligence offers security forces new tools to analyse large amounts of data and extract useful knowledge for fighting crime. Specifically, Machine Learning algorithms can identify patterns in past data that can be used to forecast what would happen in similar situations in the future. Researchers have developed predictive  police systems capable of anticipating the number of crimes that will take place in a given area, estimating the risk of a detainee recidivism, and detecting false reports, to name a few examples.

Market analysis technologies have inspired Artificial Intelligence systems aimed to prevent organized crime, since the dynamics of criminal activities can be explained using economic models similar to those of the legal economy. Analysts can use tools to study the socioeconomic context of a region and the profile of victims and criminals, as well as to identify risk factors and automatically anticipate incidents.

Business intelligence graph analysis techniques have also been applied to examine the structure of a criminal network, predict flows of information and assets between individuals, and track economic transactions suspicious of money laundering.

If Agent Schrader had had access to these technologies, he would have been able to more quickly interpret the overwhelming evidences. The city of Albuquerque depicted in the show is an ideal location for mass drug production: it is located near the border, and has little police presence, a complex orography, and industries that facilitate concealing criminal activities.

The police files also show that producers have at their disposal a network of collaborators with access to customers and incentives to participate in the distribution. And only a few individuals across the state have the scientific knowledge necessary to produce such a sophisticated drug.

A threat model fuelled by these data would have concluded that gang warfare was imminent. Graph analysis software would have guided the DEA to Heisenberg tracing its money back to the source.

Just as new technologies are enhancing the capabilities of the security forces, criminal groups have also begun to use all of these advances to target new markets. The 2017 SOCTA report on organized crime issued by EUROPOL indicates that the greatest challenge facing police forces today is keeping pace with criminals adopting and even developing advanced technologies.

Artificial intelligence can be used to commit crimes in many areas, as noted by a 2018 multidisciplinary investigation led by the universities of Oxford and Cambridge. For example, today it is possible to automatically generate and translate texts with remarkable quality, which facilitates fraud based on social engineering (such as phishing) and the creation of fake news.

It is also possible to create very realistic fake images and videos (the so-called deep fakes), violating people’s fundamental rights such as their own image, privacy and dignity, and even putting political and economic stability at risk.

On the other hand, systems based on artificial intelligence are vulnerable to cracking for criminal or terrorist purposes. For example, the alteration of the algorithms controlling autonomous vehicles and drones poses a major threat to citizen security. Furthermore, the machine learning process itself can be manipulated by introducing counterfeit adversarial examples.

The solutions: light and darkness

Currently, there are numerous initiatives aimed at equipping law enforcement agencies with better tools to mitigate these new forms of organized crime. For example, the COPKIT project, launched in 2018 and funded by the European Union, brings together researchers from 16 European organizations with a dual objective: to develop the Artificial Intelligence technologies that the police of the future will use without violating the principles of freedom, equality and justice and respecting the current legal framework.

In this regard, the use of Artificial Intelligence by law enforcement agencies and the authorities is controversial. Mass personal data collection and processing systems, such as the one being implemented in China to assign people a social credit, or the algorithms that help dictate judicial sentences in the United States (with demonstrated bias), are more reminiscent of the dystopian worlds described in popular culture than the secure and democratic societies to which we aspire.

Consequently, the use of Artificial Intelligence to fight crime must be guided by sound ethical principles. It’s about helping Agent Schrader, not setting up the Minority Report’s precrime unit.